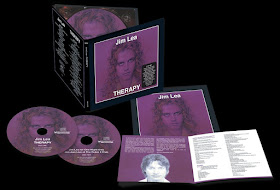 At the moment, it is possible to order Jim Lea’s ”Therapy” vinyl and 2CD Deluxe Edition along with fairly expensive signed prints of handwritten lyrics and signed 12” vinyl albums from Pledge Music: http://www.pledgemusic.com/projects/jimlea To be fair, it is worth mentioning that Jim Lea and Wienerworld (his record company) are donating all profits from the sale of the lyric sheets to MacMillan Cancer Support.

Anyway, I already have a signed album cover, I have reviewed “Therapy” before on this blog back in 2007 when it was by James Whild Lea instead of Jim Lea and I’ve even written about “Jim Jam Live at The Robin 2 R’n’B Club”, which is the second CD in this new deluxe edition, so what is interesting to me are the six self-penned bonus tracks of which five are previously unreleased.

Both on CD and vinyl you get the three songs “21st Century Thing”, “Thank God It’s Friday Right Now” and “Am I The Greatest Now?” whereas on vinyl you get “Misty Morning Light”, “I’ll be John, You Be Yoko” and “Dare To Be Great” too. The three latter you’re able to get as downloads as well, if you order the 2CD Deluxe Edition. Here are my thoughts about the six bonus tracks:

21st Century Thing is a demo version “which seemed to fit the [cranky/retro] vibe just fine” as Jim puts in the “Therapy” liner notes. While it is true that this pop-ballad with its somewhat depressing lyrics fit into the rest of the “Therapy” songs, it is not a particularly great one and of the new tracks, this ranks as number four on my track list.

Thank God It’s Friday Right Now is from Jim’s digital era, but it is probably the most boring of the new tracks. Great for Latin ballroom dancing, though! It’s number five on my list.

Am I The Greatest Now? seems to be a fan favourite already and it has even been released as a single as well. I can see why as it is what you’d expect from Jim: a totally professional, well-composed pop tune with semi-personal lyrics that fans can relate to. However, it’s not my favourite so it ends up as my number three.

Misty Morning Light is described by Jim in the “Therapy” liner notes as “a reference to the chilly misty mornings that were anathema to me during my childhood, adulthood and middle age”. This track has an almost country-feel to it and both the music and the lyrics are rather melancholy. It’s not a favourite of mine and ends right down at the bottom as number six of the six new track.

I'll Be John, You Be Yoko has been released before, namely in 2000 on Jet Records, where Jim used his middle name Whild as his artist name. In the liner notes Jim calls it “a rowdy pop thrash”. I’ve always liked this noisy, onrushing, string-loaded track with its seemingly nihilistic lyrics with a twist towards the end. Of the “new” tracks this is still my number one.

Dare To Be Great is “a little vignette that muses upon the musical oddities that end up becoming great work”, at least according to the liner notes. The composition seems a bit vignette-like and lyrics-wise it is related to “Deadrock UK” due to its namedropping, but with a different message. The message is that you have to dare to be different if you want to be great, something that Jim clearly thinks that he is when he tongue-in-cheek imitates Bob Dylan’s voice to perfection in the line “the voice of a genius”. This track has really grown on me so it’s number two on my “new tracks track list”.

I think it is clear why these six songs (maybe apart from “I’ll Be John, You Be Yoko” and “Dare To Be Great”) didn’t end up on “Therapy” in the first place. They all show solid craftsmanship, but apart from the two tracks mentioned, they are not as good as the ones on the original album. I never gave stars to the album back when I reviewed it, but I would have given it 4.5 stars out of five, which would probably have been downgraded to four only if the three bonus songs on the CD had been included, whereas it would probably have kept it’s 4.5 stars if all six track had been included.

No matter what, Jim is always a very interesting composer, an even more interesting lyric writer, and incredible musician and not a bad singer at all and I for one can’t wait to hear more from him. So bring on “String Theory” as soon as possible, please! 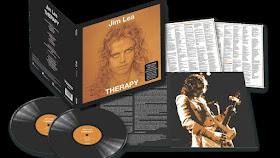